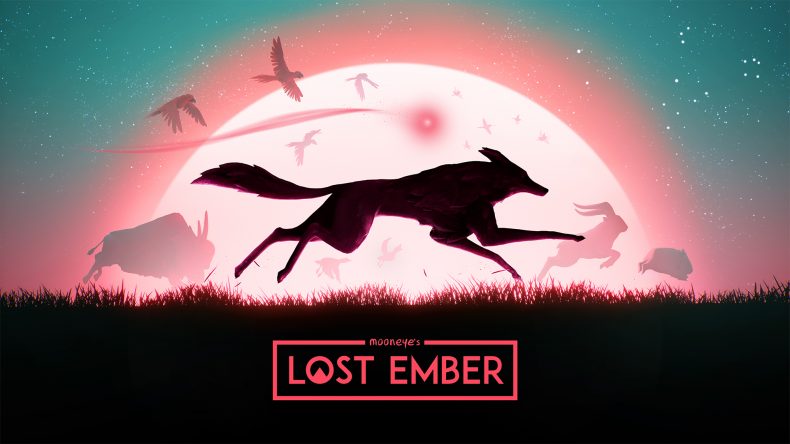 If you missed this sleeper hit on Xbox One and PS4, now is the time to check out the Switch version.

Originally released on Xbox One, PS4 and PC in late 2019, Lost Ember was not only one of the most cinematic games I have ever played, it easily stood as one of the most surprising titles of the year. Now available on Nintendo Switch, Lost Ember is still captivating, is a must play, and stands as a story expertly told.

Everything I said in my Xbox One review applies here so there is no need to explain the same details for this port. Just know that the narrative is cinematic and very emotional, the merging into different animals is always cool, and the beautiful environments are large and encourage exploration.  This downloadable game is all about the journey, the memorable set pieces, and the flashbacks to the past that has a direct correlation to why the playable wolf is doing what he is doing. There are still some hiccups with frame rate issues but the rest of the title is so well done these flaws are overlooked.

Since Lost Ember’s release, there have been many narrative driven walking simulators but none have matched the charm of this original release. This is only emphasized by the fact that Mooneye Studios is composed of a small team but it is easy to see that all their heart went into this sleeper hit game.

Way Better Than: Spirit of the North

Wait For It: Mooneye’s next game

Editor in Chief - been writing for MG for well over a decade. Gaming enthusiast. Hater of pants.
You might also like
AdventureFeaturedReviewsSwitch
7.5

When The Past Was Around (Xbox One) Review

by SquallSnake on January 3, 2021
A point and click adventure without a single word of spoken dialog, When The Past Was Around is heavily based around a narrative dripping with emotion, sadness, and the difficulty of coping when someone close is no longer there. It touches on the topic of [...]
7.0

by gillman on December 25, 2020
It is odd that it seems that new content for Sam and Max only manages to come out as the old media is starting to fall into obscurity.  Although this time around everything came out as a remaster instead of some kind of new format that they seemed so [...]

by SquallSnake on December 7, 2020
Back in late 1997, N64 owners were playing GoldenEye 007. Rare’s smash hit proved that first person shooters could work on a console, even on one that had a goofy 3-pronged controller. Even though it was released well after the launch of the film, it [...]
Comments
Leave a reply

by SquallSnake on January 26, 2021
Developer Amicable Animal and Publisher Armor Games Studios announced the release of SOLAS 128 on PC and Nintendo Switch. Available on Steam and Nintendo’s eShop from today, SOLAS 128 is an exquisitely crafted puzzle box, filled with over [...]
8