by SquallSnake on August 13, 2019
XBOX One
57
0
previous article
Destroy All Humans! $399 special edition announced
next article
Xbox has lots of DLC on sale this week 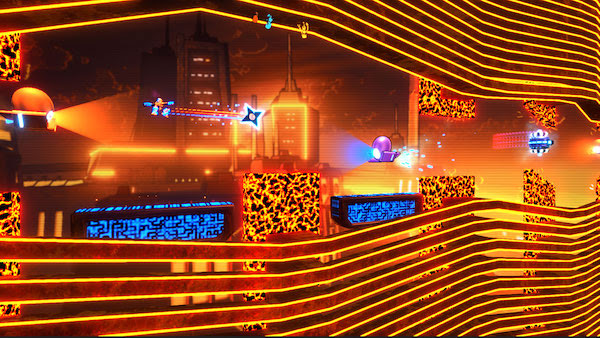 An exception to the recent platforming genre, this stage shifter turns down the difficulty but turns up the fun factor.

Exception plays into its namesake because it is an exception to the popular platforming genre that has become a fad over recent years. Instead of focusing on clearing stages of steep difficulty, Exception highlights player speed and highly reactive controls.

Basically stealing Tron’s visual look and plot, the player is tasked with stopping computer viruses as a little ninja cyber warrior.  The goal is to snag a colored microchip at the end of each stage, collecting optional items and attacking enemies along the way.  Exception is almost a spiritual sequel to N+ as it has some unique geometric level design but mixes in the fast sword swipes of ninja games like Strider. However, the player control is much more accurate and faster paced than N+ and the neon visual style is tied directly into gameplay.  Instead of just wall jumping and slashing your way through each level, the player hits stage rotating check points that literally twists and turns the entire playing field.  Often times the player will see an item just out of reach, only to come back a few seconds later after the stage has shifted to gain access.  To be clear, the player does not directly control the shifting of the stage but rather is affected after checkpoints are reached.  It would have been cool to implement this stage shifting featured to the player’s will but then the entire game would have become a puzzle platformer instead of just a reaction/speed based platformer.

Another aspect that is an exception is the RPG-like ability growth.  In time, the player will unlock new abilities and attacks.  Then, if enough optional items are obtained, these new abilities can be further upgraded to become more powerful or faster. Having access to new abilities provides incentive of replaying older stages as there are times when the player can “cheat” by taking advantage of a different approach to reach each end point.  Each stage contains its own individual leaderboard so if the player feels like there is no way they can improve upon their best time, it is best to advance further into the game to unlock new abilities then come back and try again later. There are dozens of stages too, so it will take plenty of time to finish them all and finish them all with fast times.

If the shifting stage effect wasn’t cool enough, there are also little bits of flare that also make this platformer stand out. The EDM soundtrack is constant, loud, and fits the neon visual style perfectly. Each stage is also constructed with a building transitional animation right before the player takes control, providing just a brief hint at what is to come before attempting to complete each stage. Also, if the player is interested, there is also a lengthy comic book story sequence that doesn’t need to be there but can provide detail around the story if you wanted to absorb the Exception lore.

Exception really is an exception.  Most platformers released today are focused on punishingly high difficulty.  Instead, this $15 download is a breath of fresh air that prides itself on accurate control while promoting speed and balance.  Then, mix in RPG leveling and ability unlocks with a fast-paced Tron theme, and you have something exceptional.

Not To Be Confused With: Inception the movie

Better Than: most other “me too” platformers released recently

Wait For It: a new Strider

Editor in Chief - been writing for MG for well over a decade. Gaming enthusiast. Hater of pants.
You might also like
FeaturedPlatformerReviewsXBOX One