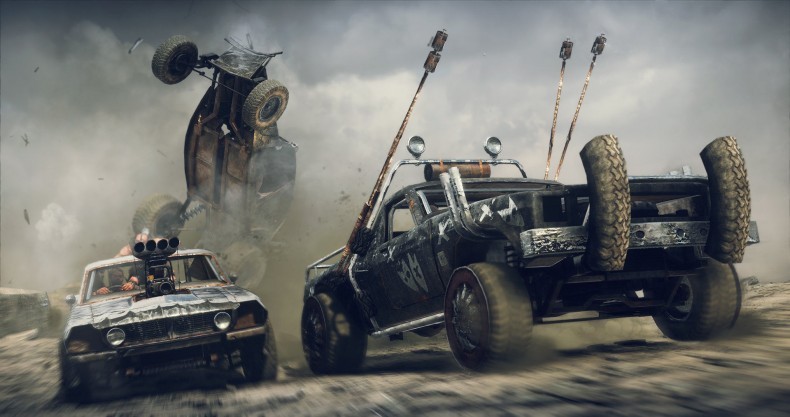 An open-world post-apocalyptic game with little to no replay value. Mad Max is certainly a game you can appreciate, but it's not going to surprise me if you don't like it enough to finish it! Fans of exploration and car combat will want to buy this!!

Mad Max has just been released for the PlayStation 4, Xbox One and PC. It’s a game with absolutely no ties to any of the movies, but if you’ve watched the movies then you will appreciate how the game really brings the world to life. It’s a third-person action video game, and you will not want to overlook it if you’re a fan of games with vehicular combat!

The game actually starts with the main character putting a chainsaw to a gang leader’s head, so it definitely doesn’t lack in the blood and gore department. After his chainsaw moment, he realized his car is stolen, and you obviously don’t want to be in the wasteland without a car.

It isn’t long until you meet Chumbucket, who wants to build this legendary car they call the Magnum Opus. Chumbucket is interested in building the car as he is the kind of guy who loves to work on cars, to him its the accomplishment. However, for Max, the main goal is to get the car built so he can make it to the Plains of Silence, which is rumored to be a much better place than where he is currently located.

Max was on this journey from the start, but a group of War Boys ran him off the road and stole everything he had on him, including his clothes and weapons. Out on his own with no one to trust, he runs into Chumbucket, and this guy just wants to build the perfect vehicle. He has the mechanical skills and Max has… well, Max has the skills to survive. They form a partnership and start searching for food, water, upgrades and other supplies.

This game does not rely on interesting characters or cutscenes to keep you interested, but the actual gameplay is what will keep you playing. I say this because the cutscenes are vague, the only thing you get from them is a little more motivation to complete another quest. If you’re a fan of the movies you will like the familiarity that comes with playing this game, but if you’re not a fan, or never watched the movies, you will like the game for the exploration and various methods of combat.

In Mad Max, you will travel the open world, explore, and get in fist fights with various gang members. You will travel in the Magnum Opus with your pal Chumbucket, who is in the car every time you are. However, that’s a good thing because his personality really gives the game a better atmosphere, and just Max alone would be quite lame in my opinion.

The hand-to-hand combat in Mad Max will feel very familiar if you’ve played any of the recent Batman titles from publisher Warner Bros. You will know what I mean if you watch a gameplay video, or you will experience it for yourself the first time you get in a fight. It’s rhythm-based combat, so one tap of a button and you will dodge or counter an attack. While these moments are rare and very brief, you will face times when the camera angle gets screwed up during a fist fight.It might be borrowed from the Batman games, but it’s a good system for sure, so I’m definitely not complaining!

If there’s anything I will complain about, its the controls! I don’t like how the X button is used for nearly everything, from breaking down doors to looting scrap – its more than just an action button. I’m not saying it’s so bad that you should avoid this game, but it does seem odd to me and you might think it’s odd too when you play it. Since the triggers are used for driving functions, you will aim with L1 and shoot with O. This took me some time to get used to, especially when I needed to use the sniper rifle, which is the only time you will shoot by pressing R2.

Okay, now let’s talk about the car combat, as this isn’t something many games feature. I honestly wasn’t too impressed with the car combat until I unlocked the Thunderpoon, which is a shoulder-fired weapon that Chumbucket uses to take down your opponents. If you damage an enemy’s vehicle enough, you will be able to take out the driver and steal their car. Vehicles can be customized and upgraded so you can increase the stats, which really makes the whole car combat thing more interesting.

After a battle, you will want to get out and pick up the scaps, as this is how you will find better tires, weapons and armor. I won’t get into the specifics, but you will eventually collect the part to build a cleanup crew, and they will take care of the scavenging for to you. It sounds strange, but its one of those things you have to play through to understand.

Here are the car customization categories:

Armor: Reduces speed but gives you more durability
Engine: Increases vehicle speed
Ramming Grill: Reduces handling and speed, but increases ramming damage
Tires: Off-road or Slicks – off-road for better driving in dirt and slicks for better grip while on the road
Exhaust: Increases the top speed of your car
Rims: Yes! You can add spikes to your wheels to increase your damage
Suspension: Incredibly helpful for heavy vehicles, this will increase your handling
Boost: We all know what this does! A nitro boost for temporary speed increases
Sniper Rifle: Perfect long-distance weapon to take down Raiders from afar
Boarder Spikes: Prevents enemies from jumping on your car, very helpful!
Harpoon: This Chumbucket-operated upgrade will take the armor off an enemy’s car and yank them right out of their vehicle!
Repair Speed: Makes Chumbucket repair the Magnum Opus at quicker speeds
Side Burners: Flamethrowers mounted on the side of your vehicle
Thunderpoon: An explosive cap equipped to the Harpoon, very deadly!
Car Body: Visual customization to change the appearance of your car
Body Color: Change the color of your car
Hood Ornament: Buff up your stats by collecting these from defeated enemy leaders

Most games based on movies suck! This game does not suck, but it’s nothing special, highly repetitive, and one you will play through just to get it out of the way and move on to the next. Okay, that sounds terrible! Let me just say that I think this game is worth buying if you’re an absolute fan of either the movie series, or open-world post-apocalyptic games. In that case, you should definitely buy it! The car combat and upgrades make it worth your time, but the cutscenes are incredibly boring. The world is still worth exploring, so give it a shot if you’re into a good exploration game!

by SquallSnake on September 23, 2022
Originally released a couple years ago on Xbox One and PS4, an XSX and PS5 version of Blood Waves is now available. Published by Sometimes You, this is a single player horde mode where a Lara Croft lookalike must survive waves of aggressive zombie attacks [...]
9.0

by Michael P Cleworth on September 13, 2022
Isonzo is the third installment of the WW1 Game Series of the Verdun and Tannenberg. Set in the rocky Italian Alps, this authentic FPS takes us back in time to the bleak, destructive age of the first world war. Throwing you straight into the [...]
6.0

Gigapocalypse (Xbox One) Review with stream

by SquallSnake on August 19, 2022
A side-scrolling kaiju simulator, Gigapocalypse is a retro-inspired action game with RPG elements. Despite the grindy nature, the die-and-try-again gameplay is encouraging thanks to the wealth of unlockables. Playing as the monster of your choosing, your [...]
comments
Leave a reply

by SquallSnake on September 29, 2022
It’s time to channel your inner animal and bust out your best and fastest moves because Jitsu Squad pre-orders are now live! ININ Games are proud to bring this adrenaline-tingling 2D beat ‘em up from Tanuki Creative Studio to Nintendo Switch, PlayStation [...]
13

These are the free Xbox games for October 2022