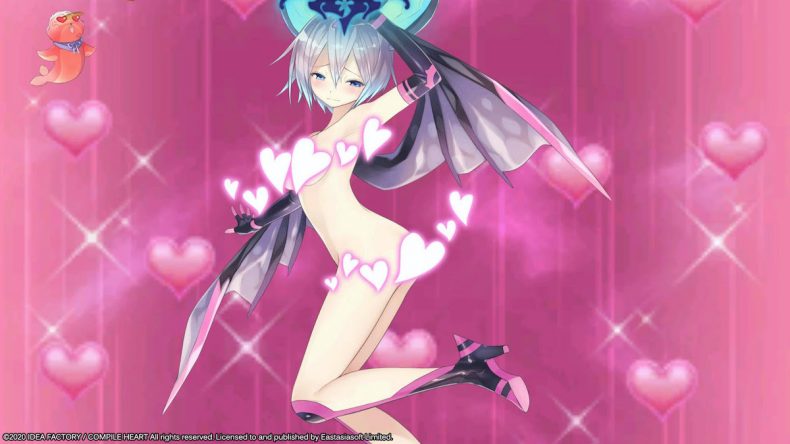 A sexy anime babe dungeon crawler with pervy mini games. What more could you want?

The Moero series has released four titles in Japan.  With this debut, America now has access to three of them.  The question of “why,” is quickly answered as they were on a Sony console, and would have to wait for PC ports.  The two import questions about this release is if it is enjoyable, and has it been censored at all.

The first question is easy enough to answer as the game is a pretty straight forward dungeon crawler/RPG.  On normal, new areas can be pretty challenging and require the player to hang towards the entrance from some time and attempt to safely grind.  There are difficulty settings that can be adjusted to make the entire experience as easy as possible, or as punishing.

The real flavor of the game comes from the amount of playable characters that are included, which has been bumped up in this “H” release to 80.  This, of course, means that the title suffers from something of a Suikoden syndrome–mainly that there might be that many choices, but only a handful of them are even worth sinking time into.

The two negatives of the game is that it feels like a budget title.  It is fully voiced, and very much lacking in content; but at times it can feel like the seams show more than they would if the company had more time or money.  The other downside is that the “scratching” mini games are designed mainly for the touchpad.  They can be entirely done with a controller, but the experience is easier with a much faster finger to swipe violently.  This is kind of annoying when the console is docked, as it feels like the mini game failures are something that would not have happened in handheld mode.

The best news, though, is that the dev of the title states that there has been no censorship, and aside from various reports that marketing material on Nintendo’s all ages digital marketplace has been “toned down,” in Japan, that appears to be the case.  This means that all of the monster girl molestation is in its rightful place to be enjoyed.

The bottom line is that this title is basically for anyone that already knows that it is a thing, and will probably not convert anyone who would casually wander on it–it is about “rubbing” monster girls that the player comes into contact with until they join the party; mainly while they are almost entirely undressed.  The dungeon crawling is solid and enjoyable, but not something that most people are going to stumble across.  If you have heard about this game, or it sounds interesting, pick it up.  It is a good time.

PC Editor. I am amazing and super awesome. I also fight crime in my free time
You might also like
FeaturedReviewsSwitch

by SquallSnake on January 26, 2021
Developer Amicable Animal and Publisher Armor Games Studios announced the release of SOLAS 128 on PC and Nintendo Switch. Available on Steam and Nintendo’s eShop from today, SOLAS 128 is an exquisitely crafted puzzle box, filled with over [...]
8