by gillman on August 4, 2019
PC
22
0
previous article
Catch A Duck (Switch) Review
next article
Robbie Swifthand and the Orb of Mysteries (Switch) Review 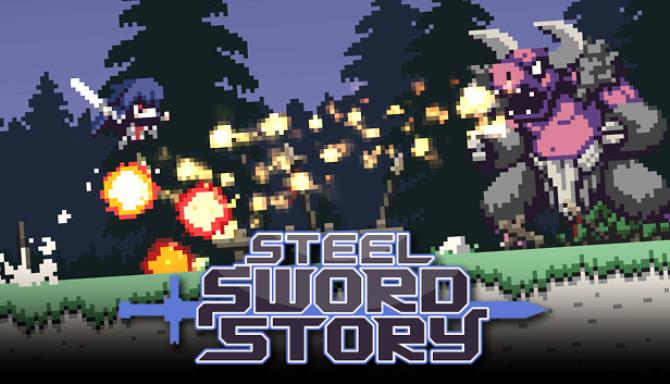 Buy on sale, only if your need for the RPG platforming genre is strong

Steel Sword Story is a neat little 2D platformer from a small company.  The game bleeds the devotion put into it by the team that worked on it, the love and commitment that was involved.  At its best moments it invokes memories of old school Gameboy/Gameboy Advance platformers long since forgotten.  At its worst it becomes a sticky mess of ill fitting ideas.

Steel Sword is a standard 2D action/platformer with RPG elements to it.  The only major twist is that all leveling up is done at the end of the level where the player spends whatever jewels (exp) the enemies dropped.  Leveling up is a straight line, and there is no side roads, so praying to the goddess statue will only ever grant whatever one thing it offers until paid for.

The wiggle room comes in with the equipment in which the character can both find and purchase from merchants throughout the game.  These items are truly what changes the character, as the level ups are mainly for more HP and MP, while these can add benefits like better defense and offense, or a double jump.

The problem is, though, that after the first several levels — halfway through the game — most of the experience has shown itself.  Enemies might be slightly different in different areas, but they mainly all behave the same.  The only real difference are the bosses, but even they aren’t anything to become crazy about.

What it comes down to is that the game is a “maker” title, a product that was produced with one of the many maker programs (RPG, Pixel, Fighter, Game Maker).  It was then sold to the general populace.  There is nothing inherently wrong with using said programs, just when it comes to charging money for the product it is slightly annoying as almost all of them have the same exact feel to them.

There is nothing wrong with Steel Sword Story, just that it isn’t really something that should have been offered up for sale.  Not that long ago this would have been something that this team would have offered on a sight as their starter project for free and people would have gone crazy over.  Now it is going to get buried in the noise of everything else because they are charging 5 dollars for it.

If you are in dire need of an action platformer, you could do worse.  Just buy it when it is discounted.

by SquallSnake on January 26, 2021
Developer Amicable Animal and Publisher Armor Games Studios announced the release of SOLAS 128 on PC and Nintendo Switch. Available on Steam and Nintendo’s eShop from today, SOLAS 128 is an exquisitely crafted puzzle box, filled with over [...]
13