by Grizz on June 13, 2018
PC
48
0
previous article
Crytek shows off Hunt: Showdown
next article
Hexologic out now for Switch 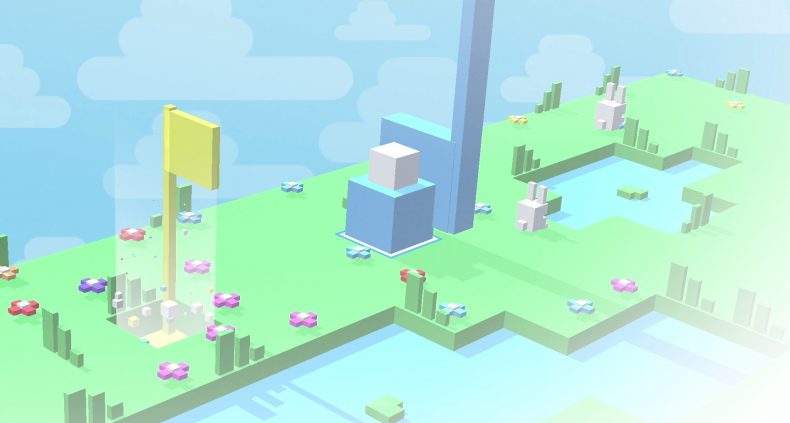 It Is Hip To Be Square

Ever since Minecraft was released, there have been many that respected the cube-like art style and wanted to make it their own. There have been adventure games, MMOs, action, and now there are puzzles games with that familiar aesthetic. Golfy Golf (or in this case more of a putt-putt) is the most recent game to use this look to try and teach the old dog of traditional golf some new tricks.  While it does have the idea of a stick hitting a ball into a hole over various terrain, that isn’t the real puzzle. The real puzzle is to do that in an isometric view, and with the least amount of hits possible.

I streamed some of Golfy Golf. Check it out below:

Being cubic lends itself quite well to the isometric layout of the all the courses, but because of the art style and color choice, it’s a bit too bright so it’s very to distinguish what makes one cube across from two or more. The ball is in theoretically exactly one cube across, but because the land is all one bright color it becomes a real challenge to gauge distance. To compound this problem, the measurement visuals given to you are very disingenuous. What I mean is that when you pull the club back with your mouse, small squares appear which many would interpret to be the amount of blocks in distance you will be traveling, but this simply isn’t the case. Its approximate at best, and you can hold back further than one square, without the next showing the distance, and it will go much further than you expect totally throwing off any gauging of distance. I can understand not putting a predictive landing area for your swing, as it adds to the challenge, but making both the distance and power hard to figure out is just asking for trouble.

Measurements aside, it’s still got some interesting layouts for levels, and plenty of them. There are of course hazards, but also secondary objectives and rewards that have a three start rating system like you might see in other games. Mini golf is a pretty safe bet when it comes to lots of things, so its no surprise that there are video games that bring it to life. While I do appreciate someone trying to meld the puzzle genre with the game of golf, I just don’t think that either side was represented very well.  Puzzles are satisfying when you really have to rack your brain to figure it out, and it feels great when you do. Golf games require precision and forethought, but the challenge here is all about guessing distance randomly, on a surface that’s hard to determine, which isn’t so challenging as it is annoying.

An IT nerd with too much time on his hands who plays way to many games. go figure.
You might also like
FeaturedPCReviewsSports