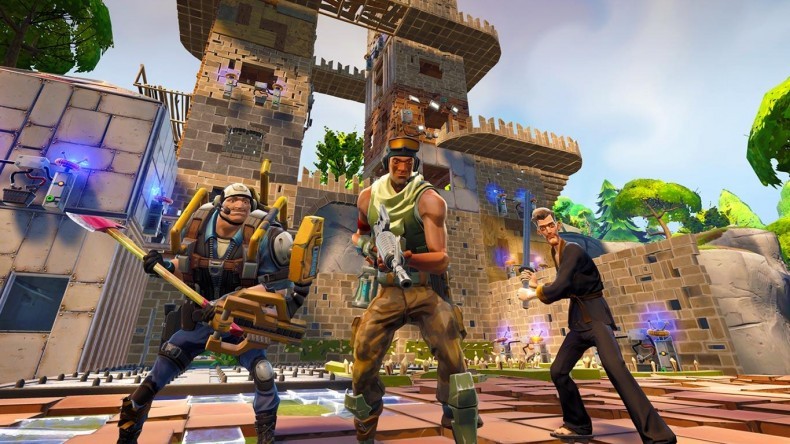 Fortnite is an upcoming co-op survival game created by Epic Games. The game was actually revealed about three years ago the Video Game Awards, where the company even released a premature game trailer. Fortnite will be the first title from Epic Games developed with Unreal Engine 4, so it’s definitely a significant release.

After years of silence, many people, including myself, thought Fortnite was history. Heck, even their “all-star designer” Cliff Bleszinski left Epic Games during this time, so it was easy to believe the game would never get a release date. However, we now know the game will get released for PC as a free-to-play title. Epic Games still hasn’t given us an official release date or even a time of year, so we have no idea when they will actually choose to release it.

If you visit the official Fortnite website you might be able to sign up for a public alpha event and experience the co-op gameplay for yourself! For now, there are videos on YouTube that will give you some insight on the gameplay.

Fortnite looks like more fun than the average survival title, as there are three phases to a game. In the game you will scavenge the map to find materials, get your weapons ready and build an effective fortress. When your team is ready you push a big button and the zombies will come your way. Sounds fun, right?

If you’re a fan of the Zombies game modes in Call of Duty, where you scavenge for items and fight off waves of zombies, then you might be interested in Fortnite’s gameplay. Yes, it features exploration, scavenging, building fortresses and killing off hordes of zombies. You know the drill, scavenge during the daytime and fight at night.

The founder of Epic Games, Tim Sweeney, has described Fortnite as “Minecraft meets Left 4 Dead”, due to the way players will build their fort. The descriptions seems accurate, as you and your partners will build every wall in the fort, and even put in the stairs, windows and roofs too. This allows the team to work in a clever way, and many players will likely develop their own building strategies for what they believe to be the most effective fortresses.

Oh, and the scavenging elements seem solid, as there is supposedly a ton of loot to be found within the maps. Speaking of maps – they are randomly generated so every game is not the same! Another interesting feature is the destruction of objects in the environment. You and your team can earn more resources by destroying environmental objects.

According to different reports, the PvP mode isn’t complete yet, but it appears that Fortnite’s PvP will fit ten players into a game.

Fortnite features the kind of weapons you would expect to have in this sort of game. There are only four classes in this game, and it doesn’t look like Fortnite has the largest selection of weapons. However, it has the ones that we care about, such as the shotgun and sniper rifle. There’s even a kitana, along with other melee weapons you can choose from.

While Fortnite may not have the largest selection of weapons, it still has a really good selection, and you can craft weapons in this game!

The four character classes in Fortnite include the outlander, constructor, ninja and commando. Yes, they each have their own unique abilities that make them useful, such as the ninja being great with close-quarters combat and the constructor being the only character who can build a high wall. Your character will level up so you can upgrade your skills and become stronger as the game goes on. Not only that, but when you collect a yellow orb it will enhance your attack damage and allow you to collect resources even faster.

Unlike other survival games, Fortnite has pleasantly bright visuals that are extremely easy on the eyes. Some survival games will feature dark graphics that require you to adjust brightness settings (not all, but on many screens) just to see your enemies, but Fortnite looks perfect.

Even though Fortnite is going to be a free-to-play release, Epic Games claims it won’t be necessary to spend money. Scavenging, building and shooting are all part of the game’s core experience and won’t be touched. Sure, you will have the option to pay for ‘card packs’, but it’s not necessary for you to enjoy the game. Of course, many gaming companies say this about their free-to-play games so we will not know for sure until Fortnite is released.

If you own a Mac then you can look forward to the OS X Beta that will come in the third or fourth quarter of this year. Hopefully, we get an early 2016 release date as it’s been many years since the game’s announcement.

by Michael P Cleworth on September 30, 2022
Train Sim World 3 is your ticket to the world’s most comprehensive simulation of high-speed rail, commuter rail and modern urban transit systems. Hop on board your choice of train and embark on a thundering journey across one of three popular routes. [...]

by SquallSnake on September 29, 2022
Sequel to Kuru Kuru Kururin, Kururin Paradise is a Japan-exclusive GBA title that has one of the best Single-Pak linking multiplayer experiences on Nintendo’s handheld. Not only are there 30 race courses (similar to the original) but the developers [...]
4.0

by gillman on September 28, 2022
Everyone gets it – The Legend of Zelda: Breathe of the Wild was a hugely popular game.  Even people who haven’t played it can attest to that by how many games have “borrowed” features from it.  Some of them are good, like Genshin Impact.  [...]
Comments
Leave a reply

by SquallSnake on September 29, 2022
It’s time to channel your inner animal and bust out your best and fastest moves because Jitsu Squad pre-orders are now live! ININ Games are proud to bring this adrenaline-tingling 2D beat ‘em up from Tanuki Creative Studio to Nintendo Switch, PlayStation [...]
13

These are the free Xbox games for October 2022