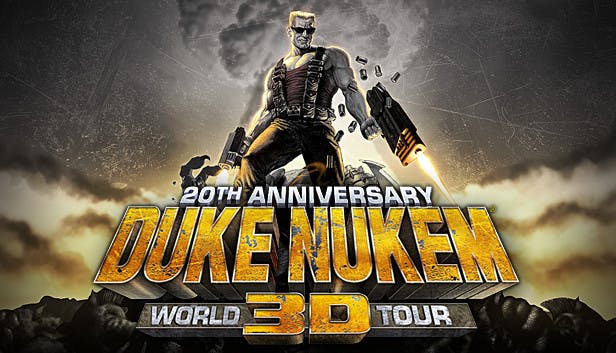 Do you feel the need to rebuy this game again?
It is actually more like the 24th anniversary vs the 20th

This Switch port is loaded with quality features fans will appreciate and newbies will enjoy – probably the best version of this classic game.

Originally released in 1996 on PC, Duke Nukem 3D has been ported to pretty much every console at this point. Chances are, you probably played this Duke adventure but this Duke Nukem 3D: 20th Anniversary Edition World Tour is probably the best way to experience this FPS classic thanks to the crafty port work done by SONKA. The only question is, why is this called the 20th Anniversary Edition when it is actually close to its 25th birthday?

There isn’t a need to explain what Duke Nukem 3D is given its long, widespread history. Instead, let’s focus on what makes this port so great – the features.

First is the HUD, mini map, and visual modes. From the main menu, players can choose between a classic HUD, map options, and can toggle a 3D render mode that makes everything look much more 3D as opposed to 2D sprites in a 3D space. I don’t know what kind of witchcraft this is but it makes the game look better than ever and worth toggling a few times just to see the difference. Also available from the main menu is the ability to active developer commentary, a completely unnecessary, unexpected, but much welcomed feature especially for longtime fans. Players can also implement Legacy Duke Talk to hear the original quips verses the new stuff.

Speaking of longtime fans, they will be pleased to know that all the content is here and each and every stage is immediately selectable from the menu.  Personally, I always had trouble trying to solve the environmental puzzles in the later stages so having the ability to skip the unfavorite parts is a great way to respect the player’s time. You know what else respects the player’s time? The welcomed rewind feature. Upon death, the player can rewind to pick up at any point. So if you accidentally take that corner too sharp and blow yourself up by an exploding barrel, just rewind a few seconds to fix your dumb mistake. The devs even included a motion control option if you hate typical control schemes. Thankfully, the motion controls work better than you think and worth taking for a spin.

If the main campaign wasn’t beefy enough, the multiplayer mode really shines and is easily one of the biggest highlights of the package. Not only can players enjoy multiplayer mode locally, there is also an option to play online and LAN with multiple local consoles. At the time I was playing this for review, the online community was very limited but entering a game now this title has officially launched shouldn’t be an issue. However, if playing online isn’t your thing, you can also play solo against an army of bots which are actually pretty aggressive and put up a worthy fight to the finish.

Even if this Switch version of Duke’s classic adventure wasn’t loaded with awesome quality-of-life features, it still holds up well today. This is impressive as this game was released in a time when 3D games were still new and developers were still trying to figure it all out. If you never played Duke 3D, this is the best time to jump in. For the fans, all the features you would want are here.

Wait For It: Duke Nukem Forever and Ever…

Editor in Chief - been writing for MG for well over a decade. Gaming enthusiast. Hater of pants.
You might also like
FeaturedFPSReviewsSwitch