by SquallSnake on June 9, 2016
1963
1
previous article
All Games via EA Access on Xbox One Will be Free to Gold Members for 10 Days in June
next article
Astro Unveils Updated A50 Wireless Headset And It Looks Beautiful 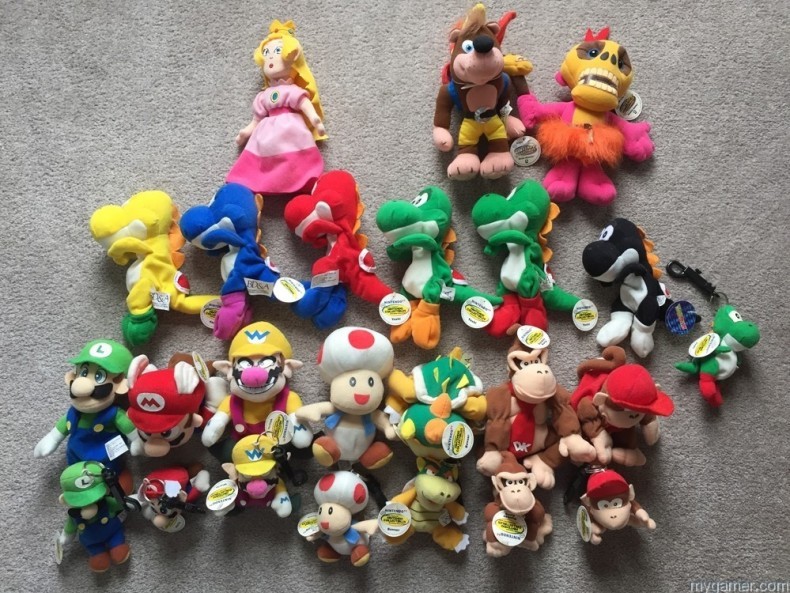 Towards the end of 1996, Nintendo released the N64 console in America. At launch, and for months following, only two games were available: Super Mario 64 and Pilotwings 64. It wasn’t until the beginning of 1997 did this fan favorite Nintendo console really start to grow a library of games. 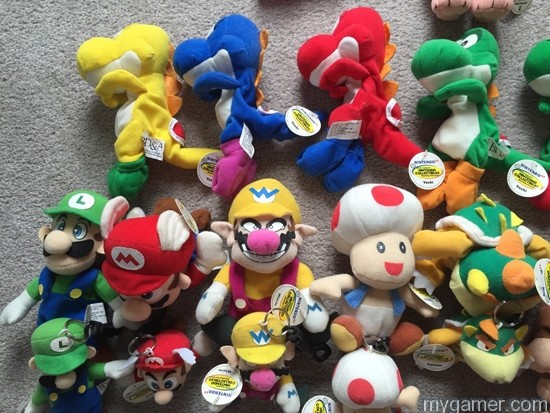 These babies are rare and worth $$$ now

Since launch gamers has such slim pickings, pretty much everyone owned or at least played Super Mario 64.  A breakout game for many reasons (one of the first 3D platformers, analog stick controller, player controlled camera, new hardware, etc), Nintendo’s popularity grew because of this one single game. Knowing that Nintendo was going to be slow on releasing games for the system, they decided to milk their flagship franchises to make a little side cash along the way.

Here’s a video about these Nintendo Beanie Babies:


Using the strength of Nintendo Power, Nintendo would occasionally ship a catalog of Nintendo stuff with a random issue of Nintendo’s now obsolete magazine.  Before the age of the internet, gamers relied on Nintendo Power for all their gaming news, previews and reviews but Nintendo Power took it one step further by allowing readers to buy a bunch of Nintendo crap through their snail mail paper catalog. 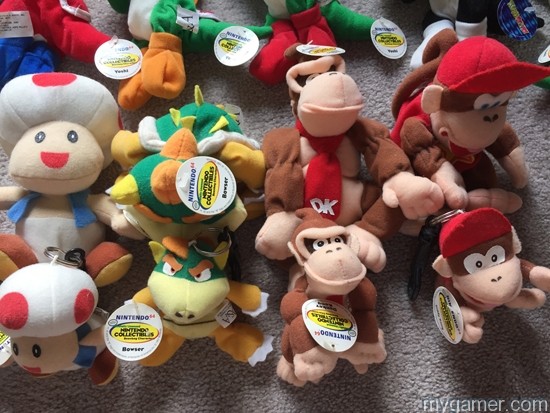 There were actually a lot of plushies to collect

What made this catalog unique was the one-of-a-kind items you could only find inside.  One such batch of items were the BD&A Nintendo 64 Officially Licensed Nintendo Collectables Beanbag Characters, building off the success of Super Mario 64 and the previous games in the series.  Released in 1997, there was an entire set of these 6” plush toys: Wing Cap Mario, Luigi, Wario, Toad, Bowser, Donkey Kong, Yoshi (more on the Yoshis in a bit) and Diddy Kong. 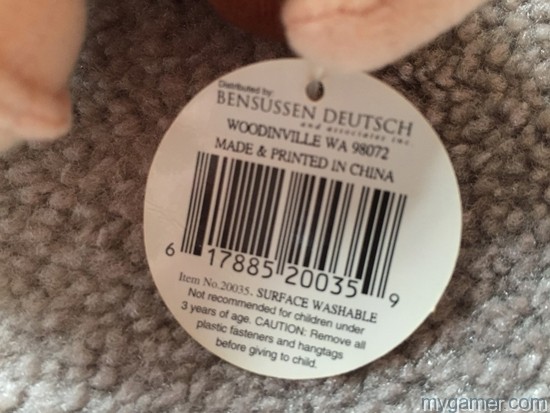 Bar codes are on the back of the tags

For the most part, these plush characters were only available to order through the Nintendo catalog. However, the smaller counterparts, the key chain plushies, were available in limited quantities at retail.  Believe it or not, I actually remember buying my key chain plushies from a local 7-11 but I remember Best Buy had a small stock of these as well along with a handful of normal-sized green Yoshis.  Either way, the key chains were available but not exactly the easiest to find and where you’d expect them to be sold. 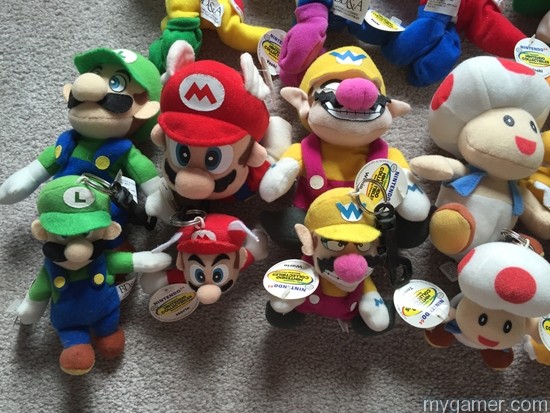 Each “big” plushies had a keychain counterpart

One year later in 1998, Nintendo expanded their plush line-up to align with other games at the time – enter Banjo Kazooie.  The great debate between Mario 64 and Banjo Kazooie is still raging on forums today but Nintendo and Rare decided to capitalize on this situation by releasing both a Banjo and Mumbo Jumbo plush toy, sold exclusively through the Nintendo Power catalog.  The Banjo plush has a Kazooie backpack and Mumbo is holding his shaman staff.  These beanbags are slightly taller and meater than the original Mario set but still of high quality.  Today, if you are even lucky enough to stumble upon one, consistently sell for over $100+ on eBay. 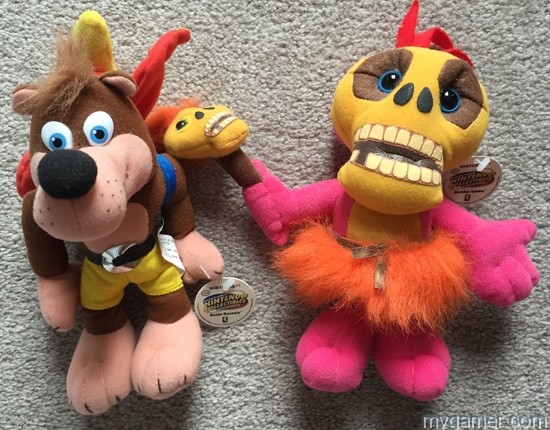 These each sell for over $100 today

Before I go any further, let me explain how the ordering process worked back in the 90s.  First, you had to subscribe to Nintendo Power by filling out a form that came with any Nintendo game at the time and mailing a check (I think it might have been like $20-$30 for a 12 month subscription).  But yes, that’s right, a check.  Remember those? Anyway, you would then have to wait about six weeks to start actually receiving Nintendo Power in the mail.  Then, about once a quarter or maybe twice a year, Nintendo would bundle one issue with the Nintendo Power catalog.  You then had to read through the catalog, fill out the order form in the back by hand, write a check, and mail everything together in a hand-addressed envelope.  You then had to wait about 6-8 weeks to receive your product in the mail.  Not only did you have to do everything manually, you had to wait about two months to actually receive your product.  Could you imagine if Amazon had to deal with this today?

Besides the Banjo and Mumbo plushie, Nintendo also made an even rarer Princess Peach, who was still often called Princess Toadstool at the time as her name didn’t fully transition yet through the fan base.  Peach was also only sold through the catalog but didn’t ship with the N64 Collectable tag.  Peach just has the BD&A tag on the back of her dress.  Peach also sells for over $100 on eBay. 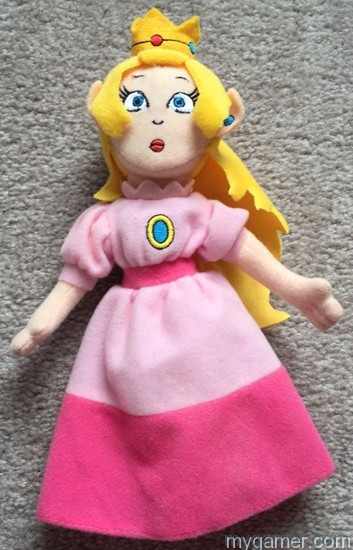 Nintendo also took their Yoshi mold and simply pumped out different colors of the lovable mascot.  The green Yoshi is the standard but Nintendo also produced a blue, red and yellow version.  One important detail to note is the color of the green Yoshi’s shoes.  The red shoed model is the more common Yoshi whereas the orange shoed version is much rarer.  Why? Because the orange one was only sold through the Nintendo catalog.  The red shoed version was available at retailer, like the key chain versions, making it a little more common. The key chain version of the green Yoshi comes with red shoes as well.  Also worth pointing out that the green Yoshi was the only Yoshi key chain made available.

Not all Yoshis are created equal 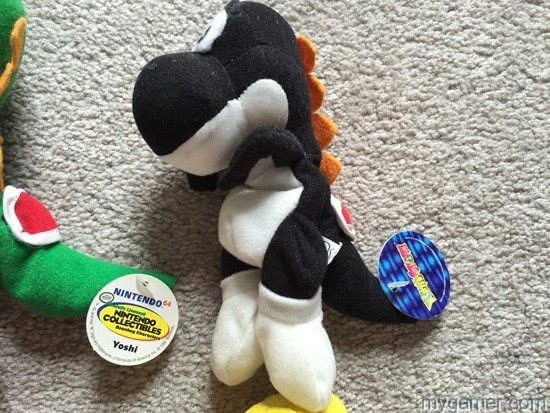 This guy is worth the big bucks

What was the process of obtaining a Black or White Yoshi?  First, I had to pre-order Yoshi’s Story on N64 (I think I pre-ordered at ToysRus if I remember correctly).  Next, I had to pick up my game upon launch along with a special mail-in order form that I received upon payment of the game. Then I had to fill out this form, make a copy of my Yoshi’s Story receipt, and then cut off the bar code from the Yoshi’s Story game box and mail everything in.  Yes, this is a collector’s nightmare as ruining a game box is sacrileges.  Then, had to wait at least eight weeks for this bad boy to randomly show up at my doorstep.  However, the order form only allowed one Yoshi: Black or White.  For whatever reason, I choose the black but the white Yoshi is just as rare.  And it might have taken 10 weeks to actually show up.  In fact, it took so long to receive that I even forgot I mailed this in when it finally arrived. I originally thought it got lost in the mail along the way. 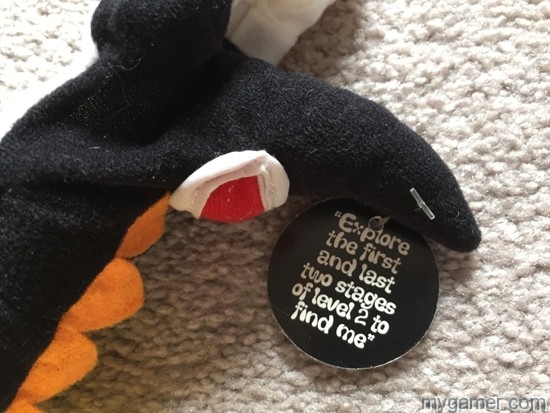 The White Yoshi also had a hint on the tag

Besides being beyond rare, the Black Yoshi also sports a different tag than the rest of the plush toys.  Instead of listing the N64 Collectables logo, the Black Yoshi tag contains the Yoshi’s Story logo on one side with a hint on the other.  The back of the Black Yoshi tag reads (spoiler alert) “explore the first and last two stages of level 2 to find me.”  Given the fact that I had about two months of Yoshi’s Story under my belt by the time this Yoshi collectable arrived, this tidbit was deemed moot but cool nonetheless.  And for the record, Yoshi’s Story is not a good game.  In fact, it is one of the worst Yoshi games of all time and had to suffer through it to get this stupid Yoshi plush. 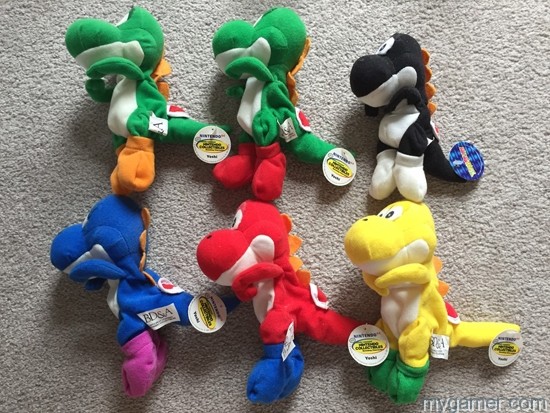 Because it has been so long and there is not a lot of information on the internet about these plushies, some details escape me.  However, I think there might have been a couple more plush toys made. I remember a Funky Kong plush being available.  This toy looked like it had a plastic head with a plush body, making it different from the rest of the lot.  He might have been holding his surfboard or something too. If you know details on this, feel free to leave comments below. I didn’t order him because I moved on by that time. He might have been available in the 1999 catalog, but again, I cannot remember. 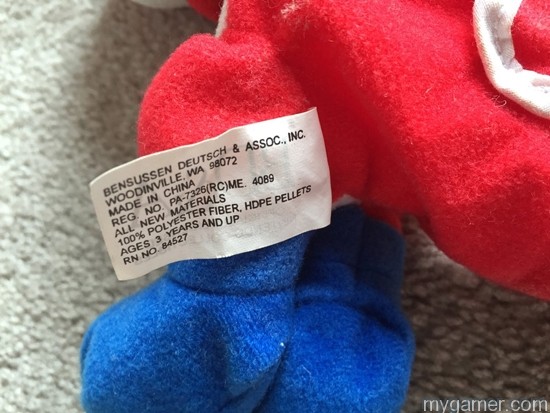 While I cannot recall the exact price of each beanbag character, I want to say like $9.99 sounds about right.  The key chain versions were probably $4.99 as they are about half the size as the original plush toys only with a plastic key chain hook.  Today, however, they sell for significantly more than this, especially in a complete lot with good condition.  The Black (and White) Yoshi, Banjo, Mumbo, and Princess all sell for $100+.  The other plush toys vary depending on quality but usually sell for $20-$60. 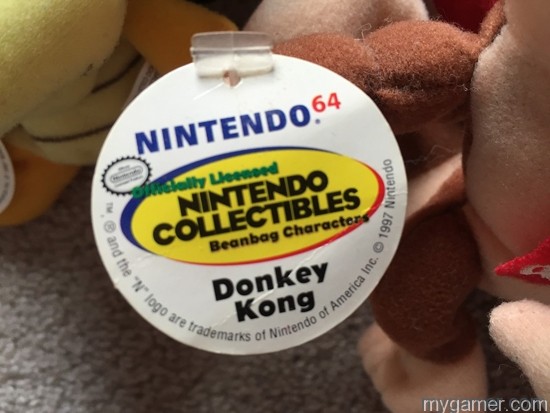 Check your closet.  Do you have any of these rare Nintendo plush toys?  If so, you could probably make a couple bucks on eBay if you can part with the sentimental value.  Let me know what you think in the comments below. 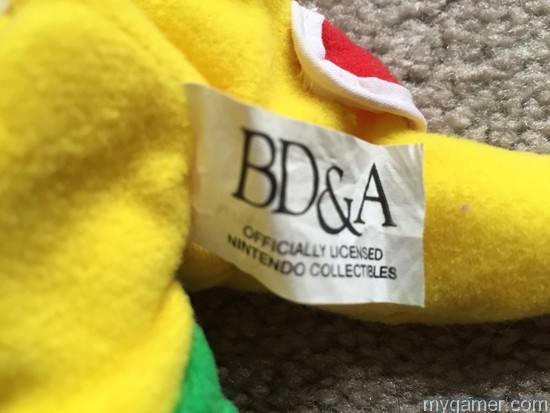 Editor in Chief - been writing for MG for well over a decade. Gaming enthusiast. Hater of pants.
You might also like
BlogFeaturedN64

by SquallSnake on January 22, 2021
Zelda II: The Adventure of Link is easily the most controversial game in the series (no, not counting the CD-I games). Whether you love or hate the side scrolling, action-based combat and steep difficulty, there is no denying this sequel has some of the [...]

by SquallSnake on December 7, 2020
Back in late 1997, N64 owners were playing GoldenEye 007. Rare’s smash hit proved that first person shooters could work on a console, even on one that had a goofy 3-pronged controller. Even though it was released well after the launch of the film, it [...]

by EffexionToo on November 12, 2020
As we step forward into the next generation of console gaming, we cast our minds back to past consoles and see just how far we have advanced in gaming technology and hardware. From the 8-bit games of my youth by the likes of Nintendo (NES) and Sega [...]
comments
Leave a reply