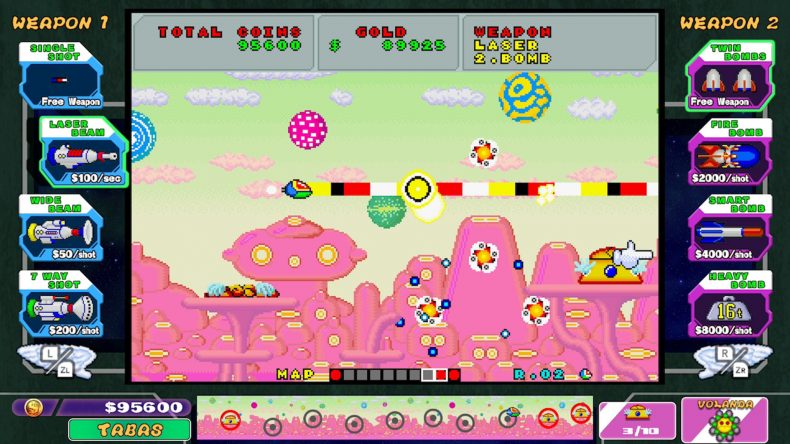 Fantasy Zone isn’t the best shooter ever made but M2’s quality emulation makes this one of the best way to play this cult classic.

The pioneer of the cute’em up 2D shooter genre, Fantasy Zone is the next title in the SEGA AGES line-up by M2. Perhaps most easily described as Defender with adorable pastel colors and a leveling mechanic, this screen wrapping shooter is rather difficult. Unlike other most shooters, take R-Type for example, the player can freely move left or right. The goal is to take down several enemy pods in each stage before facing the boss. Along the way, numerous enemies will attack the player, often from just off screen which makes this game pretty hard with cheap and frustrating deaths. Also, the player can only shoot and move in the same direction, the biggest flaw of gameplay. If movement and shooting where mapped to twin-stick controls, this would be an entirely different experience.

Once certain enemies are defeated, they drop coins. Collect enough and the player can upgrade Opa-Opa with new weaponry and speed enhancements. Personally, I think the speed upgrades are worthless as they just make it easier for you to run into enemies or bullets. The weapon upgrades are a tremendous help but have a very limited ammo stock so the player will have to rely on the peashooter most of the time. Originally designed to eat quarters at the arcade, Fantasy Zone is a challenging game for the wrong reasons which can create a frustrating experience.

Luckily, M2 added features to increase playability and replay value. Upa-Upa mode lets the player take control of the big brother ship where there is instant access to all weapon upgrades. The catch is that they use coins as ammo. It is a cool feature and brings a higher level of action to the gameplay but the player will still spent most time with the weakest weapon available due to lack of funds. Time Attack mode is also a nice alternative as the player doesn’t restart all the way at the beginning but instead picks up at the spot upon death – only time and leaderboard ranking is lost so speedrunners should rejoice. Speaking of leaderboards, just like other SEGA AGES titles, scores are quickly and automatically published which is super convenient and makes competition among other players steep. Hardcore fans will also find entertaining in the Replay mode in which the player can watch runs from players on the leaderboards. There are also secrets to unlock, which I won’t spoil here, via the main menu when enough gold has been stocked.

Personally I am not the biggest fan of Fantasy Zone as I find the challenge unfair and frustrating. However, the magic M2 casts upon their releases makes this one of the best ways to play this cult classic title if you are up for a challenge, a longtime fan, or just want to experience this noteworthy title for yourself.

Editor in Chief - been writing for MG for well over a decade. Gaming enthusiast. Hater of pants.
You might also like
FeaturedReviewsShootersSwitch

by SquallSnake on January 27, 2021
Sony announced the following games will be free for PS+ subscribers during February 2021. Destruction AllStars (PS5) Entertain the crowds by bringing controlled chaos to the vehicular combat arena of this metal-crunching multiplayer game*. Pick one of 16 [...]
26