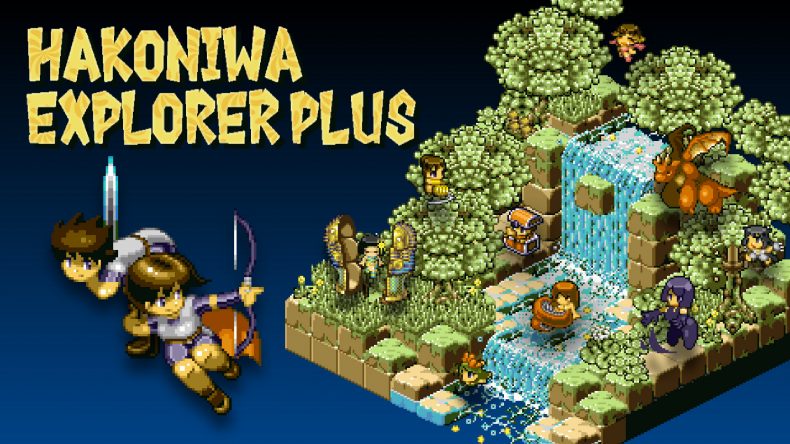 An unexpected isometric action RPG that is loaded with personality, humor, and addicting gameplay.

Two years ago, we had the pleasure of checking out Hakoniwa Explorer Plus on PC. Happily, this isometric action RPG has been ported to Switch and is a shiny gem on the eShop.

Hakoniwa is an unexpectedly humorous action title that destroys any expectations you gain by looking at any screenshot or trailer. Due to the boxed, grid design of the visuals, it might be assumed this is a turn based tactical RPG. Instead, the player roams around this voxel environment freely, smoothly jumping and attacking at the push of a button.

This eShop digital download is an oddly pleasing juxtaposition between gameplay and humor. On one hand, the difficulty and slightly rogue-like gameplay elements are taken seriously but the story and approach is anything but.  For example, when the player begins a quest, the game defaults the name of your save file to a ridiculous phrase, basically calling the player a name. If you bump into an NPC from behind, they will call you a perv for touching their butt. Do it too many times and there are consequences.  Items like the “pervy liquid” and “sh*tty gloves” are common items found throughout the entire campaign.  But the best example is one NPC that forces the player into an unescapable dialog loop, hounding the player for being a horn dog and taking all your money in the process. Think Mr. Resetti but way more hurtful, long, and funny.

The best part is the high level of humor but thankfully the gameplay, visuals and soundtrack are implemented with quality. Starting from a sleepy town, the player ventures outside to the overworld map. Entering a close proximity on the map reveals a stage or challenge, and when completed, more quests can be activated by talking to townsfolk or just wandering the map.  It is an addicting gameplay loop that rewards the player by providing loose direction on where to go next.  The lack of a finely tuned handhold actually works to the advantage of the player, providing a sense of accomplishment with the exploration.  Since the each map is rather small, it never takes long to figure out what to do or where to go next.  The in-game trophy system also provides direction and incentive on missing mission objectives as well.  It is an interesting, quality system that glues everything together seamlessly and with a high amount of entertainment value.

The soundtrack and visuals are also outstanding.  Composed of Minecraft-like blocks, even the most subtle elements are animated.  The world breathes and writhes constantly and is often filled with secrets and encourages experimentation.  It wasn’t until I read a missing trophy in the mission objective room that I realized I could jump on top of a waterfall to find a secret, not just go through it.  Swinging a sword also cuts grass to reveal more of the map too, a little detail that adds that level of charm to make this entire experience stand out.

Hakoniwa Explorer Plus is a sleeper hit gem of a game through and through. If the gameplay loop wasn’t enticing enough, the humor and creative writing will easily put a grin on your face. The least you know about this game before diving in the better. Just play it and enjoy it despite whatever expectations you might have.

Way Better Than: your expectations

Wait For It: Minecraft 2

Editor in Chief - been writing for MG for well over a decade. Gaming enthusiast. Hater of pants.
You might also like
ActionFeaturedReviewsRPGSwitch
5.0