I still have mine. Nintendo should figure out a way to port some of these games to their Virtual Console. Give players a chance to play games that they never had the opportunity to play.

I owned one, and had Mario Tennis and Wario World. Both of em were actually pretty damn good.

Are you guys talking about that head mounted display thing with the red lines?

The system actually had an innovated controller. Ahead of its time.

Yeah, it was the first one to have dual directional inputs.

Kinda like how Nintendo had modems for the Famicom back in the 1980's, and people keep complaining about how Nintendo took so long to get their heels into the online game. They were so far ahead of the curve, but the technology wasn't ready for it. Streaming Zelda dungeons? Gee, that sounds an awful lot like downloading new quests and areas in Oblivion...

Wow. That's quite possibly the stupidest thing I've read on this forum.

At least my grammar, spelling, and mechanics are consistent.
Last edited: Mar 25, 2007

I didn't say you were wrong. I said that post was stupid.

Oh hey! I remember the virtual boy! I wasn't quite impressed with it as I was with other gameboy-related inventions but it was a step in the right direction for virtual gaming at least.

Galactic Pinball and WarioLand actually were not bad. The T&E Soft Golf game was pretty solid for its time too. Mario Tennis was/is actually very bland.

I honestly never even knew this existed until I saw some reviews and features of it on YouTube. I probably wouldn't have bought it back then anyway though even if I had known about it but I think the existence of it is very amusing since it is a very silly gadget that only ends up hurting your eyes. Whoever thought about making the graphics red is a troll.

The Virtual Boy is particularly notable case in Nintendo's long history (especially during the eighties and nineties) of having excellent core conceptual ideas that were simply too far ahead of their time, as in too far ahead of the then current technological capabilities (and perhaps even the cultural Zeitgeist as well in some cases) and were thus rather botched in their execution.

Other examples of this history include: the Nintendo Knitting Machine (which let users design sweaters and the like on their Famicon, and then have it be knitted by an attached printer!), the Power Glove, the microphone built into the original Famicon controller, R.O.B. the robotic buddy, the Roll & Rocker, the Power Pad, and so. (I would honestly even put the Game Boy in this category by virtue of comparing it to Sega's Game Gear, if it weren't such a massive success!)

It's exciting that we've now reached the point where we can properly execute the core conceptual idea of the Virtual Boy vis-a-vis the likes of the Oculus Rift. Virtual reality consoles that now have sufficient graphics with a richer pallet than merely black-and-red, a strap attaching the headset to the player's head, and so on. 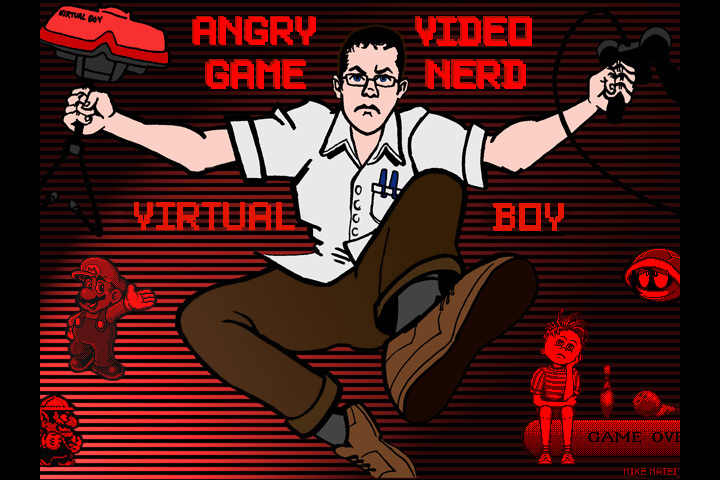 Among other things, James presents a solution to the strapless issue that would make Red Green himself proud!

James also makes a valid point about the very nature of the games comprising the Virtual Boy's limited library: beyond the red-and-black issue, 3D graphics alone don't make for a virtual reality game--a virtual reality game should also be immersive, be open world, and use a first-person perspective! Granted, we again face the limits of the time's technology with respect to being immersive and open world.

Mario Tennis was by far my favorite game on the system. My cousins and I played it for hours at a time when we stayed at my grandmothers place one summer. Another game I rather enjoyed was Red Alarm, I loved flying through the corridors.
You must log in or register to reply here.
Share:
Facebook Twitter Reddit Pinterest Tumblr WhatsApp Email Share Link
Top Bottom