Unsung games from the past.

A truly great game from the SNES days that got no play at all was Weapon Lord. Developed by NAMCO in 1995, it served as a great predecessor to Soul Calibur as far as being a cool weapons based fighting game with a furious and devastating combo system. Though Weapon Lord was handicapped by a slightly slo-mo style gameplay and only a few characters, I did offer a very cool and violent game experience with Conan-esque backgrounds, nasty powerful weapons, and a rudimentary fatality system. An overwhelming yet underappreciated 2D fighter. Check it out for those of you who still have an SNES.

Show me what you've got Mygamer.

Anything and everything made by SNK for the NES.

Weapon Lord was hard as hell.

Decent: Freespace 2 for PC is the greatest Space Sim I have ever made. it was made in 2000 is even better than the games that came out after it. But it was pulled from shelves for no reason and noone has heard of it.

Also Operation Flashpoint was the father of games like Battlefield 1942 and in alot of ways better, but it never recieved the praise.

I also loved Little League Baseball for the NES. I don't like sports games, but this game was absolutly awesome.

I know this is an arcade game, but I didn't start playing console games until 2001, but Joust is one of my favorite games of the past...

Altered Beast....Even though the console version was less-than-favorable than the Arcade Version...still both versions were great back in the day

ActionHank said:
Decent: Freespace 2 for PC is the greatest Space Sim I have ever made. it was made in 2000 is even better than the games that came out after it. But it was pulled from shelves for no reason and noone has heard of it.
Click to expand...

Actualy, I think the first Freespace's story was better... but Freespace 2 was pretty cool. After Freespace 2 went away, that was pretty much it for the Space Shoter genre (well, besides Independence War). Too bad, seeing as how there was a developer with a Babylon 5 space sim that was like 85% done when they pulled the plug on development. GAH!!

:roadblock Came up with another one of my retro favorites....when posting for the new Psp version of this:roadblock 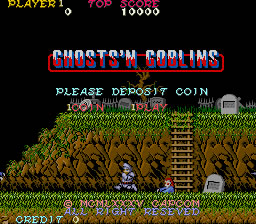 And now they're bringing out the PSP version:

Wow, Ghosts n' goblins for PSP looks super sweet. Can't wait for Wii to arrive and play all of those great old games on the virtual console. BTW, the knight in G n' Gs must strong as hell to able to carry around all those lances.

Another great game was Toejam and Earl. Just a couple of free-roamin', funked out aliens doing all their crazy little things and causing all knids of havoc, those were some good times wasted. Anyone played the xbox version? any good?

I hate G&G. I seriously think it is one of the worst games ever created. I did play the Toejam and Earl for Xbox, but it wasnt really anything special.

Ultimate Ghosts ‘n Goblins on the PSP, I'm getting that one for sure....

Y'know, a game I remembered playing a lot was Bulls Vs. Blazers on the Genesis. I remember this one time when my brother was playing the hated Bulls (I grew up a Knicks fan) and I played the Blazers. I had a great game with Clyde Drexler and with only a couple of seconds remaining I had a two point lead. My brother had to throw it in from full court, and with time running out, of course my little brother gets it to Michael Jordan who proceeds to sink a shot from half-court.

I was stunned, my little brother's crowing was irritating and I threw my controller down in disgust, but I'll always remember that for a few instants I actually felt that level of almost real excitement of having the game in my hands until "His Airness" decided to snatch it away.

Oh, one I forgot for the Genesis is Lightning Force. It was a pretty awesome 2d space shooter which had a pretty huge arsenal and some nifty bosses.

That had the weirdest teams: the Boston Frogs, Chicago Devils, Los Angeles Hot Dogs, and the New York Turkeys. It was fun just to watch the "parade" of mascots in that game.

Strider...that game rocked so hard, I think I still have callouses from playing it so freakin' often. Still, it really wasn't unsung...I mean, it's gotta be on a lot of wishlists for the non-Nintendo games people want available over the Wii download. 'Cause it's awesomeness killed Rygar and made Rastan cry.
You must log in or register to reply here.
Share:
Facebook Twitter Reddit Pinterest Tumblr WhatsApp Email Share Link
Top Bottom